You are here: Home Chemistry Laboratory method of Preparation of Aniline

Laboratory method of preparation of aniline

Principle: In the laboratory, when nitrobenzene is heated with tin and HCl, aniline is formed. The reaction of tin (Sn) and conc HCl produce nascent hydrogen and SnCl2 or SnCl4, the nascent hydrogen reduces – NO2 group to – NH2 group.

(i) Aniline formation: Conversion of nitrobenzene into phenylammonium ions

A mixture of nitrobenzene, tin and hydrochloric acid is taken in a flask attached with a reflux condenser and heated at 700C for half an hour, this produces aniline.

Nitrobenzene is reduced to phenylammonium ions using a mixture of tin and concentrated hydrochloric acid. The mixture is heated under reflux in a boiling water bath for about half an hour. Under the acidic conditions, rather than getting phenylamine directly, you instead get phenylammonium ions formed. The lone pair on the nitrogen in the phenylamine picks up a hydrogen ion from the acid.

(ii) Separation of aniline: The produced aniline further reacts with HCl forming anilinium hydrochloride salt. When an alkali solution is added to this salt, aniline is separated and remains floating forming a layer of a dark brown oil.

The division of the compounds in a combination should be as almost quantitative as probable in order to give some idea of the genuine proportion of each element. Also, it is very significant to carry out the division in such a method that each compound is obtained in pure shape.

(iii) Extraction of aniline: When the oil undergoes steam distillation aniline is distilled along with water in the receiver flask. When the distilled liquid is saturated by common salt aniline is separated in the form of oil. This oil is then separated by a separating funnel. 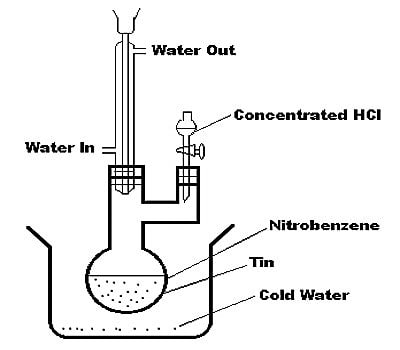 (iv) Purification: Aniline so found, then dissolved in ether and dried by solid caustic potash. When it is refluxed at 1840C we get pure Aniline. After this separate aniline from water and dry it with anhydrous potassium carbonate.

Method of decontamination of aniline is Steam sanitization: Aniline has a very high boiling point; it is immiscible with water, unstable in steam and having high vapor pressure at the boiling temperature of the water.

Another common way, Prepare aniline oxalate, recrystallize from 95% ethanol, stimulate free base with potassium carbonate, dry and distill it under reduced pressure. More widespread purifications involve preparation of derivatives, such as the double salt of aniline hydrochloride and cuprous chloride or N-acetylaniline (114 °C) which can be recreated from water.